skip to main | skip to sidebar

NEW RESERVATIONS: REFLECTIONS on NEWS of a TASTING MENU in the COVID ERA

This week, I read that restaurateurs of a fine-dining restaurant in Austin, Texas, planned a novel idea for "service" during our collective state of COVID confinement. They would provide their tasting menu to reserving guests by virtually gathering them from scattered home kitchens to follow along and cook the menu in that "alonetogether" patchwork of screen boxes we've learned to substitute for a shared table.

I figured that the synchronous preparation and enjoyment of the same menu was meant to recoup not only some of the restaurant's revenue but also one of the fine-dining restaurant's profound services to humanity: I mean its ability to enhance civilization by offering a communal aesthetic and social experience that enlivens the senses and expands the imagination. Check and check. (And "Check, please!")

Upon reading this news, I was touched by the resourceful creativity of the restaurateurs. I marveled at their tenacity. I understood that doing anything other than adapting--however imperfectly, however not like it was--under today's dire circumstances might be far worse. Something had to be done, right? Leave it to restaurateurs to find imaginative solutions. I admired these people in Austin trying to make it work.

I also felt depressed. The news of this creative solution only highlighted the loss of what makes me want to visit a restaurant. The transformation of the restaurant into a home-cooking experiment might mean the financial survival of some business models (and I support any effort, really, at this terrible point), but it means losing what I love about restaurants. I love the kitchen staff's cooking and want to experience that, not mine. I love the ambiance. For this reason, I leave my home. I love the privilege of being served by competent, graceful servers. I appreciate what it takes to execute good service, and when I choose to go to a restaurant, especially a fine-dining establishment, I am willing to pay--and tip--well for it.

What can I do to get the restaurants I love back to what I loved about them? So far, all I've managed to do is get lots of takeout, donate whatever I can to the legitimate causes, including some Gofundme pages for specific beloved places, and calling and emailing Congress to fix the sorely lacking PPP bill so that it benefits restaurants. I follow Independent Restaurant Coalition and #saverestaurants (saverestaurants.co) and post what they suggest I post. I applaud my local government's employment of restaurants to help feed seniors and those too much at risk to venture out to get their own food.

If I can do more, I will. I want my beautiful, bountiful restaurants back. I don't want them permanently transformed into home-cooking courses and curbside pickup joints.

Book Release: MAY WE SUGGEST: RESTAURANT MENUS AND THE ART OF PERSUASION 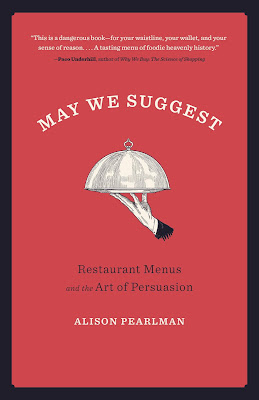 Years in the making, it has finally arrived!

Get yours at your favorite book store or directly via this link:
https://tinyurl.com/ydz3cyyr

We find restaurant menus everywhere. But we know little about how they work. In May We Suggest, I investigate how they try (and sometimes fail) to influence what we buy, how we dine, and how we feel about both.

In 77 visits to 60 restaurant brands of all types throughout the greater Los Angeles area, I asked: How does a menu’s size, structure, imagery, language, materials, and pricing dictate what we buy or how we compose a meal? Does a fine-dining table menu try to hook us the same way as a signboard over a fast-food counter or a mobile-ordering app? What convinces us that one menu has enough choice and another too much or not enough? Along the way, I show how menus of differing styles operate. I also uncover what rhetoric works when, where, and why.

You will not find a book about restaurant menus quite like this. I define restaurant menus in an expansive way, considering spoken variants, displays of real food, and digital varieties--not just sheets of paper and signboards. My study draws on an unprecedented range of disciplines, from experience design to behavioral economics. It is also the first book about restaurant menus to explore how, in their efforts to persuade us, menus seldom act alone. I show how they cooperate with restaurant décor, service, and other merchandising devices.

Dear reader, if you are a restaurant-goer, a restaurateur, or a student of either, join me to find out how it is that, while we order from menus, menus try to order us. Anyone interested in the workings of restaurants, the experience of dining out, the rhetoric of things, and the subject of consumer choice will find the read enlightening and even amusing.